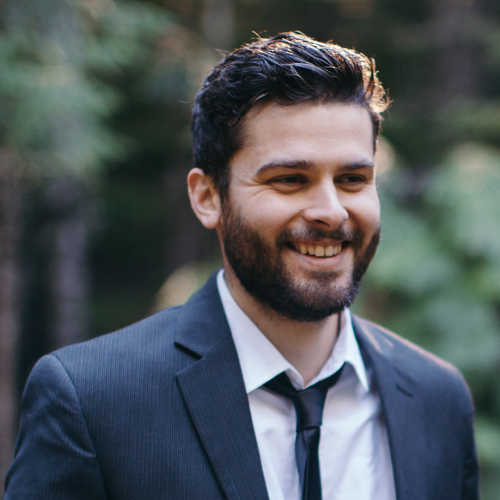 Leadership is rallying people around a vision so exciting/compelling that it becomes theirs, then empowering them to turn that vision into reality, and doing this in such a way that their quality of life increases in the process.

I have a running list of 10-15 attributes that I want to continually master and embody. I recite and meditate on them almost every day. They are what make me, me. Here are some of them:

I want to make people feel empowered. I want them to feel stronger and more confident as a result of being around me.

People with perseverance who take ownership over their lives and succeed against the odds through hard work, determination, and ethical decisions. Also, people who have the ability to live in the future, recognize an opportunity, create a compelling vision around it, and then lead others towards turning that vision into reality.

Building things and leading movements that have world-changing visions and strong core principles.

I have always found unexpected success when I’ve had the courage to question the status quo, and upon finding it incorrect, lead a movement towards changing it. I was a college dropout and I questioned the role of traditional education in building a successful career. I started a podcast and community around the subject that became fairly popular, and this led me to more success in ways I didn’t expect.

I have also always found unexpected success by being extremely eager and willing to do new things that are outside of my comfort zone. This always leads to a wider range of experiences and a vast network of relationships that expose me to many opportunities.

My first business was a residential/commercial painting company. In our early days we landed a big contract to paint three large apartment complexes in Atlanta, GA. We naively thought we could make easy money by hiring another sub-contractor to do all the work while we toured up and down the West coast with our band. We didn’t have strong project management or quality control systems in place and were operating mostly on trust that our subcontractor knew what he was doing. The result was not pretty:

I ended up flying to Georgia at midnight on a Tuesday during the holidays to fix the situation. I experienced my first and only panic attack on the plane. I listened to a record by The Bahamas the whole way there, and to this day whenever I hear their music I feel anxiety. What followed were some of the toughest weeks and months of my career.

At one point I was hiding from a rough mob of angry workers, peering at them through the blinds of my crappy apartment while they angrily searched the property for me. Our contractor had screwed them over, and I didn’t know where I was going to get the money to make things right with them, let alone finish the massive job we had promised to do.

We ended up using funds we didn’t have to finish the job and pay everyone what they were owed. I picked up a paint brush myself and oversaw the job until it was complete.

Our shortage of funds fell on to our materials supplier, and we ended up being massively in debt to them with no way to pay. They were well within their rights to sue us and they let us know this.  We seriously considered filing for bankruptcy. It was hard to see a way out, and I remember feeling like such a failure.

Instead, we drove to the headquarters of our supplier and met them in person. We were transparent about our situation and promised to pay back everything if they would just be patient with us. They agreed, and for almost a year we paid them everything we could, which many times barely covered the interest. Twice a month I would take the initiative to call them and explain where things were at. My goal was for them to never chase us for the debt.

We ended up landing another major contract in Texas, and having learned our lesson, this time we did well and were able to pay back everything we owed and then some. That supplier went on to be our main materials provider and recommend customers to us on a regular basis. In 2015 I ended up selling the painting company at a profit.

Here’s what I learned:

Over almost 10 years of marriage, my wife’s and my monthly burn has rarely exceeded $6k. The extra we make goes towards experiences, building things, or savings. My wife and I don’t require much to be happy. Like Hayden and his family, we aim to have less things over time.

If I total up the cost of my ideal lifestyle, I don’t know how to spend any more than $250k/year on myself and my family (that includes putting savings away). Anything I make beyond that goes towards people and endeavors my family and I believe in and want to support.

Money solved is 12 months of living expenses in a savings account and passive income from 3 or more sources that cover my monthly expenses.

I naturally fall on the thoroughness side of the spectrum.

I have a strong morning routine with exercise, journaling, meditation, and reading. Then 3 hours of creative work, 1-2 hours of calls with team members or our acquisition entrepreneurs, and 2-3 hours of learning and/or teaching/mentoring.

Alternatively (but still including the morning routine), I am spending my day speaking at events, meeting stakeholders, and generally rallying the public around Acquira’s vision.

Your role at Acquire

I am part of the leadership team and I direct our marketing efforts. One of my roles is also to ensure that we work with the best acquisition entrepreneurs who are also a culture fit.

I want to build and lead something monumental that increases the quality of life of millions of people. I believe the best way to have this kind of impact is through owning thousands of businesses because a business has incredible influence over it’s employees, it’s customers, and it’s larger community.

First and foremost, THE TEAM & MISSION – there is nothing like doing meaningful work with people you love. Secondly, the personal growth – I am constantly being challenged and leveling up. Thirdly, the freedom – the ability to work from anywhere and control my own schedule is incredible.

One thing I would love to do is buy and improve bars, specifically more on the pub side of the spectrum with live music and other events. In addition to applying smart optimization and growth strategies, I think creating a culture that goes out of its way to increase the quality of life of every employee and every customer would go a long way in a bar.

I love that bars can transcend social boundaries. People from all walks of life will drink together.

This is an opportunity to learn from someone else’s perspective. I love that you can get customers at both ends of the personal fulfillment spectrum – from people at the top of their game drinking to celebrate, to people at rock bottom drinking to escape. This is an opportunity to learn from someone’s success and to empower someone who needs a helping hand. Bar employees are often using the job as a stepping stone to something bigger, this is an opportunity help them ascend and succeed. I would love to create an environment that leaves people better off for having visited (beyond getting drunk) and build that culture into our systems.

I think it would also be great to own a portfolio of training/education companies. I like the idea of being responsible for people’s personal development.

My wife and I are married almost 20 years and going for another 50+, we have a portfolio of businesses and we are homeschooling our kids

My family lives life in a new location (another country or state) for 3-6 months out of the year. We also travel to visit the people on this team a lot.

I consistently have my ideal workday (see above)
Acquira is an investor in thousands of businesses that are each giving back to their employees and communities.

The Acquira University is providing a university alternative for free and putting tens of thousands of graduates per year into apprenticeships.